Last summer, Legoland California in Carlsbad opened the new Sea-Life Aquarium.  Legoland’s parent company, Merlin Entertainment, already had several similar aquariums in various European locations, but this was their first in the US.  We took the opportunity to visit the attraction during a trip to Legoland over the recent President’s Day holiday weekend. 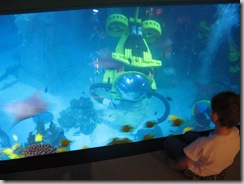 My reaction to the aquarium is conflicted.  I was quite impressed by its theme and decor and I felt that the overall child-friendly design of the exhibits was absolutely outstanding.  If the aquarium was presented as an included attraction at Legoland, or for a very low extra charge, I would be praising it very highly as an excellent addition.  Unfortunately, they have instead decided to position it as a stand-alone attraction with pricing to match.  In my view, it just doesn’t offer enough to justify that approach.

The full priced admission to the aquarium is currently listed as $18.95 for each adult and $11.95 for children.  At least at present, they are offering admission to Sea-Life as a $10/person/day add on with Legoland admission, but even that feels a bit high.  We spent about 90 minutes going through the entire attraction twice and it felt like we were stretching it out quite a bit.   We were able to take advantage of an $8/person price currently being offered to Legoland annual passholders (with a coupon) until the end of March and even that felt a bit high for our family of three for that amount of time, although I suppose that price/time combo is pretty comparable to a movie.

I was surprised that the aquarium has a linear design that pretty much forces guests to tour the exhibits in a specific order.  I had expected a more traditional museum-type design where a central lobby would provide access to the various exhibits that could be visited at leisure in any order.  I think the one-way, linear design of Sea-Life played very heavily into the fairly fast speed at which we finished with the whole attraction.  The design didn’t really seem to encourage lingering anywhere overly long and certainly didn’t make it easy to go back and re-visit specific parts.

The first indication of the attraction’s linear design was a sign out front warning that the only restrooms in the facility are at the very end of the tour.  The sign also advised visiting the restrooms next to the entrance to Legoland before entering the aquarium.  The failure to include a set of restrooms about mid-way through the facility definitely seems like an oversight in an attraction of this type, particularly since families with children are the main target audience.

The main entrance to the aquarium is on the front, right-side of the building with just a couple turnstiles and ticket scanning machines providing access.  There is also a second entrance from inside of Legoland, but we didn’t use it and I’m not entirely certain where it actually entered.  My guess is that it probably just provides access to a pathway that goes to the same small waiting area outside the main doors.  After going through the turnstiles, we had a short wait before the doors opened and we were directed into a small pre-show room.  A day ticket to the aquarium does allow for unlimited readmission, but you do have to repeat the pre-show each time.