(Hans Zimmer, 1991): I’m pretty sure that Backdraft was the first film in which I really noticed a Hans Zimmer score enough to purchase the soundtrack album.  Of course, Zimmer has become one of the most successful working composers in subsequent years, but his distinctive style was something of a fresh discovery back in 1991.

The score features Zimmer’s usual mix of orchestra and synthesizer, with a rock beat behind the main theme.  While this musical sound is now pretty ubiquitous, largely because of Zimmer and his protégées, it felt very new when this film first came out and I remember being very excited to get the soundtrack album.  While it isn’t nearly as distinctive today, the score still holds up as one of the best examples of this style of scoring.

While there are some action-oriented portions to the score, especially during the cue “Burn It All”, the majority reflects more of a dramatic intensity.  Strings and synths dominate, with a pretty ever present percussion backing.  Occasional choral elements come into play as well, particularly during some of the more action-oriented sections.

The soundtrack CD opens and closes with the Bruce Hornsby songs “Set Me In Motion” and “The Show Goes On”.  Hornsby has a very recognizable style to his songs and both of these are easily recognizable as his.  Generally, I think they fit reasonably well with this score.

Bad Boys (Mark Mancina, 1995): This film was the first pairing of director Michael Bay and producer Jerry Bruckheimer and was essentially the first instance of the heavily rock-influenced instrumentals that film score enthusiasts often refer to simply as the “Bruckheimer sound”.  There is a lot of room for debate as to whether or not that should be considered a positive milestone.  The scores to Bruckheimer’s films from 1995 onward are most widely associated with Hans Zimmer and his influence is evident.  While Zimmer didn’t score the film, Mancina was employed by his company (at the time known as Media Ventures) and another Mancina protégé, Nick Glennie-Smith, also contributed to the score.

Mancina was likely hired to score the film largely on the strength of his generally acclaimed score to Speed the year before and the similarities are obvious, particularly in the main theme.  The score is generally driven by synthesizer, keyboards, and electric guitar, with orchestral components generally given a backseat.  Acoustic guitar is occasionally used to score the film’s rare quieter moments, as in the cue “You’re Going to Leave Me Alone?”  The score also has some appealing reggae influences, first given significant play during the cue “JoJo, What You Know?”, and revisited periodically afterward.  Even the score’s main theme has a reggae influenced melody, which becomes more evident as the score continues on.  Fairly intense wordless vocals are also used periodically.

The soundtrack album released with the film was primarily a song album and only included one 4 minute score cue featuring an arrangement of Mancina’s main theme.   In 2007, La-La Land Records released a limited edition 70-minute CD of the complete score.  This edition is still available at their site and is currently priced at just $9.98.  It is very much worth getting at that price. 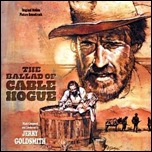 The Ballad of Cable Hogue

(Jerry Goldsmith, 1970):  This Goldsmith score to a Sam Peckinpah western is very song oriented, with vocalist/songwriter Richard Gillis playing a very substantial role on the soundtrack.  The main theme is based on a Goldsmith-composed song entitled “Tomorrow Is the Song I Sing”, which Gillis performed and served as lyricist.

Gillis himself wrote two other songs that are performed in full on the soundtrack (including the end credits cue) and occasionally incorporated into the score.  His involvement is sufficient that he probably could be considered a co-composer on the film.  One of Gillis’ songs is entitled “Butterfly Mornin’” and is performed by Jason Robards and Stella Stevens on the soundtrack.  Likely due to the available source elements, some sound effects are heard during the song.

The instrumental score is a pretty traditional western score, complete with harmonica, banjo, harp, and even organ, although portions are much more orchestral.  The score is very lively and often melodic.  The western style is very prominent in cues such as “Hasty Exit”, while the more melodic, orchestral side is well represented in “A Soothing Hand”.  The cue entitled “The Rattlesnakes” is a good example of one that blends the two aspects very well, eventually also introducing some sound effects to represent the titular creatures.

The fairly short (37 minutes) soundtrack CD was released as a limited edition by the Varese Sarabande CD Club.  It is sold out now and very difficult, and typically very expensive, to find now.  The one copy currently being offered by a seller on Amazon.com is priced at $189.

The Ballad of Lucy Whipple

(Bruce Broughton, 2001): In the 1980s, it looked like Bruce Broughton was going to be one of the industry’s top film composers but, almost inexplicably, he has instead somehow ended up almost exclusively scoring TV or direct-to-video movies and the occasional theme park attractions.  He hasn’t scored a major theatrical release since 1998’s film version of Lost In Space.  His TV projects have often been pretty prominent ones and, thanks to a close working relationship with Intrada, a surprising large percentage of his TV scores have still generated soundtrack releases.

The Ballad of Lucy Whipple was a CBS western starring Glenn Close.  Broughton provided a pretty traditional western sound for the score, although on a fairly small scale.  The ensemble that performed the score is pretty small and only features instruments that would have existed during the period when the film was set.  These include fiddle, cello, acoustic guitar, tin whistle and period horns and percussion.  The result is a mostly intimate sounding score, although Broughton does occasionally manage to wring a fairly big sound out of the small ensemble, such as in the action music contained in the cue “Jake’s No Buck”.

Those expecting a big-scale western score like Broughton famously provided for Silverado and Tombstone are apt to be disappointed by the much smaller scale of this one.  The music is very good, though, and a nice demonstration of Broughton’s skill for melody.

(Edward Plumb, Frank Churchill, Larry Morey, 1942): Bambi generally set a new high water mark for the level of the drama in a Disney animated film, particularly with the famous and extremely moving death scene for the title character’s mother.  The excellent soundtrack CD put out by Walt Disney Records very effectively conveys the charming and often dramatically rich music for the film.

The score by Edward Plumb emphasizes woodwind and string melodies that pretty effectively reflect the rustic, wildlife settings of the film.  The musical mood shifts effortlessly from playful to romantic to dramatic intensity as needed.  The score introduces some brass for the fairly majestic “Gallop of the Stags/The Great Prince of the Forest/Man” with choir joining in to emphasize the title character’s royal lineage and finally giving way to some harsher strings and brass during the last minute or so of the cue to introduce a touch of menace.  I emphasize that particular cue as it represents a bit of a turning point where the music shifts from the more playful tones of the title character’s early childhood towards a more dramatic scoring eventually culminating in the very dark “Man Returns”.

The songs by Frank Churchill and Larry Morey are all performed by choir and blend extremely well with the score to give the film a distinctive musical character.  “Love Is a Song” plays over the film’s opening titles and nicely establishes the musical style for the film.  “Little April Showers” is the most creative and interesting song from the film.  It very convincingly evokes a rain storm musically, including bringing to mind the raindrops via individual notes presented at varying tempos as well as using percussion to represent thunder.  “Let’s Sing a Gay Little Spring Song” captures the optimistic mood of the season while “I Bring You a Song” is a nice romantic ballad.  The CD also includes “Rain Drops”, a demo recording of an alternate song to “Little April Showers”.

(Bruce Broughton, 2006): In the late 90s and the 2000s, Disney released a whole series of direct-to-video sequels to their classic films.  These generally were of very questionable artistic merit and didn’t come close to equaling the quality of the originals, but they did sometimes involve some decent talent.  Bambi II featured a score by Bruce Broughton.

The soundtrack CD released by Walt Disney Records only contains about 10 minutes of Broughton’s score.  It is unfortunate that there isn’t more of it there, but it is a bit of an unusual treat that any of the score was made available at all.  The rest of the CD includes a few pop songs that were used in the movie and, oddly, the songs from the original Bambi, which probably were added mainly to fill up a disc.  The new songs from the movie are fairly generic light pop songs from Alison Krauss, Michelle Lewis, Martina McBride, and Anthony Callea.  None are particularly bad, but none are particularly memorable either.

Broughton’s score is, not surprisingly, inspired by the music from the original film.  He incorporates “Love is a Song” at several points in the score and the rest is stylistically in line with Edward Plumb’s compositions.  Woodwinds and strings dominate again, although Broughton definitely uses brass a lot more frequently, often in a less menacing manner.  The cue “Being Brave (Part 2)” is a particularly lively, brassy cue.  The relatively short length of the score on the soundtrack makes it a bit hard to tell the degree to which Broughton develops themes, although there is a central melody to the cue “Bambi and the Great Prince” that sounds like a primary theme for the title character.

(Jerry Goldsmith, 1968): Goldsmith’s score to this western is especially colorful.  It features a full orchestra, but supplemented by a wide variety of less common instruments.  Among those used include harmonica, banjo, xylophone, wood blocks, castanets, marimbas, guitar (both acoustic and electric), and even a whistler.

The score is built around a fairly simple, but infectious, main theme that is played on many different instruments throughout the score.  The album’s first cue, called “The Saloon”, instantly establishes the unusual style of the score by introducing the main theme in a version that sounds like a saloon piano.  Over the main title, the theme is initially presented by a solo whistler.  In addition to the variations of the main theme, Goldsmith introduces one strong secondary theme for the film’s female lead.  This gets an especially strong statement in the cue “Dee’s Proposal” and figures in other parts of the score as well.  There is also some good action and suspense material peppered throughout the score as well.

I have the expanded, limited edition version of the soundtrack that was released by Intrada in 2004.  Unfortunately, this release is long out of print and now very difficult (and expensive) to obtain.  This edition includes the complete score (about 44 minutes), plus about 3 minutes of early demo versions of both main themes.  The CD ends with the original 1968 soundtrack album program, which runs another 30 minutes.  The original album is an interesting inclusion on this one as the mixes are pretty dramatically different.  Many of the unusual instruments were removed from the mix for some reason.  It is an interesting alternate take to the score.