(Alan Silvestri, 1986): Alan Silvestri’s score to the Chuck Norris action film Delta Force is one of the most prominent fully-electronic scores of Silvestri’s film career.  There are no orchestral elements in the score at all.  It is instead entirely performed on a Synclavier synthesizer, giving it a very energetic, modernistic sound.  Silvestri’s musical style is definitely evident in the score, but the electronics gives it a somewhat different flavor.

The “Main Title” cue starts off with some very rhythmic, fairly dissonant material before eventually transitioning into a melodic, anthem-style main theme.  This theme melody is worked into other parts of the score and Silvestri also provides some other effective melodic elements, such as the music heard in the cue “First Class”.  Rhythmic action music is definitely the dominant feature of this score, though, and the album is pretty much packed with high-energy action cues.  The  main theme is often well woven into the action cues, as in the excellent cue “Rescue”.  The theme does a good job of providing a solid anchor for the score.  In several cues, Silvestri also programs the synthesizer to present a melody in a style that resembles a bell choir, providing an occasional bit of gentility during an otherwise intense score.

Intrada’s 2008 limited edition CD release is somewhat notorious among film score fans for the fact that all 1,000 copies had sold out within about 15 hours after the announcement.  This title is often cited as a case study for the growth of the soundtrack fan community and the demand for titles by major composers (particularly titles from the 80s and 90s), even when the movie and/or score isn’t thought to be particularly popular.  Used copies of this CD now regularly sell for well over $100, a price probably defined more by its reputation for rarity than by the quality of the score itself.

The Intrada CD contains the complete score and runs for about an 1 hour and 15 minutes.  A 38 minute LP of excerpts from the score was released at the time of the film’s release.  A previous CD release on the Milan label paired about 32 minutes of the score (it was missing one cue from the LP release) along with excerpts from Jerry Goldsmith’s score to “King Solomon’s Mines”.  The Milan CD is generally easier to find at more reasonable prices, although the Intrada release is definitely a preferable presentation of the score. 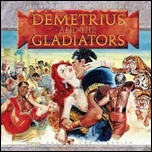 Demetrius and the Gladiators (Franz Waxman, 1954): This biblical epic was the sequel to The Robe, the hit film that had famously introduced the CinemaScope widescreen format to theaters a year earlier.  While The Robe featured a score by Fox’s music director Alfred Newman, the sequel was scored by Franz Waxman.  While Waxman does occasionally re-use some of Newman’s key themes from the previous film, the majority of the sequel score consists of original compositions.

The score is pretty much what you expect from biblical epics during that era, which certainly isn’t a bad thing.  The score is a large-scale orchestral work with lots of strings and brass as well as some dramatic choral elements.  The central theme is an exciting march that is loosely derived from Newman’s music for the earlier film, but with orchestrations and surrounding material that is original to the new film.

Waxman’s most substantial original themes include a lush and seductively charged theme for the character of Messalina and a darkly menacing villain’s march for Caligula.  Messalina’s theme is first heard in a short presentation in the cue “Messalina” and is developed further during several later cues, some of which contain the character’s name.  The villain’s march is prominently featured in the cue “Caligula Enters”.

The soundtrack CD was released by Film Score Monthly as part of their Golden Age Classics series.  It is a limited edition of 3000 copies, but still readily available.  The score is presented in stereo with generally decent sound quality, considering the age of the recording.  A handful of damaged cues are presented as bonus tracks at the end of the CD.  Other bonus tracks include some original temp tracks that were provided by Newman and some brief alternates.

The album ends with a 5 minute cue from Film Score Monthly’s previous release of Newman’s The Egyptian, repeated on this release in order to correct a mixing error that was present on the previous release. 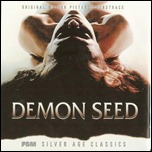 Demon Seed (Jerry Fielding, 1977): Jerry Fielding’s score to Demon Seed was released on CD by Film Score Monthly in a Silver Age Classics limited edition that was paired with Fred Myrow’s score to Soylent Green.  The result was a CD release that definitely tends towards the strange.

Fielding’s score definitely falls into the weird category.  The score is dark and atonal, pretty frequently straddling, or even crossing, the line between music and sound effects.  Much of score is performed on synthesizers, although even the orchestral elements are rarely melodic. Only very rarely are bits of melody introduced, including in the final segment of the album’s first cue as well as much of the surprisingly brassy “End Credits” cue.  The overall effect of the score is definitely creepy and fairly unsettling. 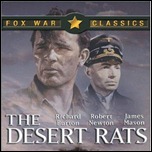 The Desert Rats (Leigh Harline, 1953): This brief selection of music from Leigh Harline’s score to the sequel to The Desert Fox is included on an Intrada limited edition CD that also includes Alfred Newman’s What Price Glory? and Roy Webb’s Fixed Bayonettes!  The other scores are the dominant attraction on that release, but the music from The Desert Rats is a nice extra inclusion to fill out the CD.  Note that as this score is kind of an extra on the disc, there is no album art for it.  The above photo is adapted from the video release art.

Very little of the music from the film included on the CD is original (I’d estimate about 5 minutes or so).  Instead, the album mostly consists of arrangements of existing music.  The album opens with the rousing “Rommel” cue, a reprise of Daniele Amfitheatrof’s theme from The Desert Fox.  Throughout the score, Harline frequently uses the melody from “Waltzing Mathilda”, often interpolated with his own military-style brass and percussion music.  A version of “Greensleeves” is also presented and bits of Wagner is also worked into the score.

While this makes for a kind of a wildly varied mix, it is still rather entertaining throughout its brief running time. 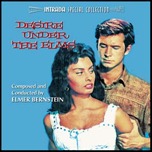 Desire Under the Elms (Elmer Bernstein, 1958): This fairly early Elmer Bernstein soundtrack was released on LP around the time of the film’s original release.  The same program was re-issued on CD by Intrada in 2008 in a limited edition release that is currently still available from their website.  While the album is fairly short (about 30 minutes), it gives a good overview of an impressively dramatic, and often intense, score.

The album has an attention grabbing opening, starting off with a burst of strings followed by some very intense brass.  This sets the stage for a very dramatic score with a strong sense of melody but also with an intensity that, at times, seems more like something out of an action film than from a character-driven drama.  Strings are particularly dominant throughout the score, with much of the intensity coming from the use of low string chords.

The film has a western setting and Bernstein occasionally introduces some nice touches of Americana-style melodies that provide an interesting counter to the other, darker material.  The opening portions of the cue “California Gold” provide the first example of this side of the score, which does bring to mind some of Bernstein’s later, fairly popular western scoring.

Desiree (Alex North, 1954): Alex North provided a highly melodic and romantic, classical-style score for Desiree, an historical drama that starred Marlon Brando as Napoleon.  The film centered around a key romance in Napoleon’s life and, thus, has a mix of the romantic and historic/military music.

North builds the lighter parts of the score around a fairly jaunty main theme, typically presented on strings and piano.  This theme is heard prominently early on in the cue “Youthful Diary” and also often features in some of the more romantic segments of the score.  As in “Proposal” it is often presented alongside some more lush and emotional melodies that give the score a bit of a romantically melancholy quality.  A similarly upbeat melody also features in the cue “The Entrance”.

In addition to North, this score also includes a couple key themes composed by Alfred Newman, the head of Fox’s music department at the time.  These include the fairly grand “Main Title” cue as well as the very enjoyable and beautiful “Desiree Waltz”.  The inclusion of strong thematic material by two of the top Golden Age composers definitely adds to the appeal of this soundtrack.

The Devil at 4 O’Clock (George Duning, 1961): George Duning delivered a bold and melodic, fully-orchestral score for this early disaster film, focused on a volcano eruption.  The score is dominated by exciting and fast-paced string playing, often accompanied by some aggressive piano along with occasional brass and percussion bursts.  The early cue “Up the Mountain” is a particularly strong showcase for all these elements.  Choral elements are occasionally used, as in the cue “Wail for a Village” and the very effective ending to the score’s final cue “Farewell to Camille – End Title”.

The score has its quieter, more emotional portions as well.  The “Theme for Camille” is a particularly effective, very melodic, string-dominated love theme.  These more melodic segments occasionally include a bit of a lightly jazz-influenced touch, including the occasional subtle introduction of a slight underlying percussion track.  While the score always remains fully orchestral, this added element brings a bit more of a contemporary feel to it.

The score was originally released on LP on the Colpix label and was eventually re-issued on CD by Film Score Monthly, paired with another Colpix release, Sol Kaplan’s The Victors.  The music is presented in stereo and the sound quality is acceptable, although it does have a bit of a thin sound that belies the age of the recording. 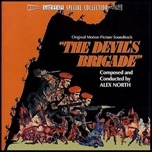 (Alex North, 1968): Alex North’s score to this World War II themed drama is a heavily brass-dominated and highly energetic military action score.  The score is anchored by an exciting, main march, primarily featuring a French horn, supported by a full range of brass and percussion instruments.  The theme is introduced in a highly entertaining “Main Title” cue that opens with drums and a bagpipe introduction before transitioning into that main march.  This is overall a score that is bound to be well-liked by fans of brass, which is used extensively and creatively throughout.

Parts of the score do reflect North’s sometimes darker sensibilities as well, including the second cue “30 Mile Hike – Parts I and II”.  In particular, North darkens the score quite a bit through the fairly extensive use of lower register brass, including some pretty extensive tuba segments.  Aggressive, low-register piano also comes into play at times, such as in the rather dark “The Stream/Continuing Down the Stream”.

This score received its first ever soundtrack release on a 2,000 copy limited edition CD from Intrada, which is not currently very easily available.  The CD contains a complete stereo presentation of the score running about 43 minutes, plus another 14 minutes of bonus cues.  These include a number of source cues, including some by North and some instrumentals of jazz and Christmas standards.  The bonus section also include alternate versions of both the main and end title cues.