(Jerry Goldsmith, 1987): The score to the Kurt Russell/Steven Seagal action thriller Executive Decision is not one of Jerry Goldsmith’s more memorable efforts from the late 1980s.  It certainly isn’t helped by the Varese Sarabande soundtrack CD’s exceptionally abbreviated 30 minute running time, something all to common at the time due to union re-use fees.

The score certainly isn’t bad, though, even if it doesn’t stand with his best work. As was commonly the case for Goldsmith’s action music late in his career, the score is orchestral, but with a pretty substantial assist from synthesizer elements.  Brass and percussion are highly dominant in the score, underlining the military focus of the film.  In these ways, the score somewhat resembles Goldsmith’s much more familiar Air Force One score, but without that score’s much more memorable main theme.

The Executive Decision score is certainly a competent effort on Goldsmith’s part and, perhaps, would be better served if an expanded soundtrack album were ever released.  With only the abbreviated presentation available, though, it seems like a minor and mostly forgettable effort. 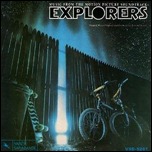 (Jerry Goldsmith, 1985): Jerry Goldsmith’s score to Joe Dante’s Explorers is high on my list of scores that I would most like to receive an expanded re-issue on CD.  The existing Varese Sarabande soundtrack CD (a port of the old LP release) only contains a little over 30 minutes of Goldsmith’s score, as well as a handful of pop songs.  It is also fairly rare and expensive to obtain.  What is there is quite wonderful, though, and I’d absolutely love to have much more of the score on CD.

The score’s infectious main theme is established in the album’s opening cue, entitled “The Construction”.  It opens with a rhythmic, synth-driven baseline that it then overlaid with a distinctive, playful melody.  Both of these components of the main theme are frequently revisited throughout the score, sometimes separately and sometimes together.  The score is primarily synthesized, helping to bring a bit of an otherworldly quality to what is still a largely melodic presentation.  This is one of the best of Goldsmith’s synth-dominated scores.

The entire score has a strong sense of wonder as well as a frequent romantic quality to it.  One of the strongest cues is the soaring “First Flight”, which is built around the main theme, but with slow builds to crescendos, representing the sense of excitement and adventure central to the accompanying scene in the film.

The film takes a very quirky turn towards the end, which is heavily reflected in the last couple score cues on the CD.  The score becomes much more blatantly electronic, with the otherworldly tone moving fully into the forefront.  These portions of the final two cues take on a bouncy, kind of swing-style that is both unusual and exceptionally appealing.  Goldsmith very effectively interweaves this with the more melodic style that played in the earlier part of the score, bringing these two aspects of the story together in a way that Dante was not otherwise entirely able to do in the film itself.

The soundtrack CD ends with three pop/rock songs that were used as incidental music in the film.  These are “All Around the World” by Robert Palmer, “Less Than Perfect” by Red 7 and “This Boy Needs to Rock” by Night Ranger.  The original LP release interspersed these cues with the score cues, but Varese Sarabande wisely grouped them at the end for the CD version.  All three are pretty decent songs, in my opinion, but they are very easily skipped if you want to hear score only. 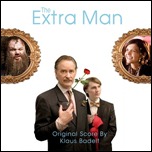 The Extra Man (Klaus Badelt, 2010): On his website, composer Klaus Badelt has taken the unusual step of offering “name your price” lossless digital downloads of several of his more obscure scores.  Basically this means that you can download the entire soundtrack album and pay as much or as little (or even nothing) as you wish.  This is an intriguing way to get some exposure for scores that otherwise probably wouldn’t be widely heard.

The Extra Man score may come as something of a surprise to anyone that is only familiar with Badelt’s contemporary-style action scoring (often in collaboration with Hans Zimmer’s stable of composers)  for films like Pirates of the Caribbean: Curse of the Black Pearl.  Instead, this is a gentle, melodic classically-styled score with a strong Italian ethnic flavor.  Violins and piano tend to dominate the score.  Accordion and xylophone are  also featured on a number of cues, providing a lot of ethnic flavoring.

There is a little bit of contemporary, pop styling that peeks through alongside the more old-fashioned ethnic material.  The cues “Opera Entrance” and “Lagerfeld to Gallery” are particularly sharp examples of this.  The blend of old-world ethnicity and more contemporary styles (including occasional bits of synth) is an interesting mix.

One slight down side to the album presentation of the material is the decision to present the music primarily in very short cues.  Many are less than a minute and only one cue, “Homeless Montage”, exceeds 2 minutes.  This gives the album something of a choppy sound and I think the music would have been better served by assembling some longer suites.

With the unusual “name your price” approach, this is a very low risk score to obtain and is definitely worth checking out.

The soundtrack opens with a title theme that is performed on solo piano (possibly actually an electronic keyboard).  The entire score is dominated by piano/keyboard, although with occasional string support as well.  The score is very atmospheric, with a very sensitive and non-overbearing quality, although admittedly it is also fairly downbeat.  The material is largely non-thematic, instead going more for a mood-driven approach.

While this is unquestionably a minor effort compared to Horner’s many better known scores from that time period (and beyond), it still is an interesting opportunity to hear a less often heard side of the composer’s style.  I think this is a CD that is worthwhile to seek out, particularly for Horner’s fans.

(Danny Elfman, 1996): The soundtrack CD for Danny Elfman’s Extreme Measures is another of the 30-minute abridged CD releases that Varese Sarabande frequently put out during that time period due to the high re-use fees charged by the musician’s union.  Typical of these releases, the CD gives a taste of the score, although feels fairly incomplete.

While Elfman’s scoring projects in the mid-90s still were dominated by his trademark quirky fantasy and action films, he was also increasingly taking on more straightforward dramatic projects.  Extreme Measures is one of those, although it mixes in more of Elfman’s more offbeat conventions than is often found in his dramatic scores.  This includes the use of wordless vocals as a rhythmic instrument or, as in the case of the cue “Cokie”, to introduce an ethereal element.

The score is dominated by strings and piano, with a melodic main theme that is introduced right at the beginning of the “Main Title” cue.  The theme, like much of the rest of the score, has a dark quality to it.  The darkness in this case tends to be more on the ominous suspense side, rather than the macabre darkness found in many of Elfman’s better known scores.

Extreme Prejudice (Jerry Goldsmith, 1987): This little-remembered late 80s action film from director John Milius featured a strong, synthesizer-driven score by Jerry Goldsmith.  It is pretty reflective of the composer’s approach to action scoring in that time period, with its mix of driving bass rhythms anchored in a melodic main theme.

While the score is dominated by the electronic elements, Goldsmith does use an orchestra as well, although it is mainly the horn section that makes a significant impression here. The core melodic and percussion components are primarily synthesized and strings are largely kept in the background to the degree that it is often difficult to distinguish them from the synthesized melodic material.  The film is essentially a western, which makes this a somewhat unusual approach.

The opening “Arrivals/Main Title” cue is pretty hard driving and percussive, setting the tone for the Goldsmith’s approach to the action scoring.  The fairly simple but melodic main theme is introduced here, mainly as a synthesized overlay presented over the top of the percussion.  The most recent CD release of the soundtrack opens with an unused trailer score, which is actually the most complete and fully-developed presentation of that main theme until the end credits suite that closes the album.

The more melodic aspect of the score comes into focus during the second cue, “Cash”, which opens with moody, semi-romantic melodic material, still dominated by electronics.  This is a lengthy cue that eventually adds in some percussion, particularly electronic rhythmic clicking (for lack of a better descriptive term) that periodically is isolated from the melodic material.  The main theme does make another appearance here, including a distinctive horn presentation.

The rest of the score continues in a similar style, with the harder-driving, percussive music generally making the strongest impression.  In particular, the lengthy multi-part cues “The Bank (Pts 1, 2 & 3)” and “The Bank (Pt 4.) provide an especially strong showpiece for Goldsmith’s electronic action scoring.  In the late cue “Fighting and Dying”, the score takes a bit of a surreal turn, with some of the electronics shifting closer to sound effects.  This is kind of jarring, but thankfully remains infrequent in the score.

The soundtrack was originally released by Intrada on LP and CD at the time of the film’s original release.  This program had a pretty generous (for the time) 50 minute running time.  In 2005, La La Land released an expanded CD version, which added about 15 minutes of additional material, including Goldsmith’s logo music for Carolco, the film’s production company. This was not a limited edition and is still readily available. 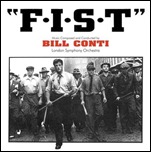 (Bill Conti, 1978): This action film was Sylvester Stallone’s first movie after his breakthrough success with Rocky and it re-teamed him with Bill Conti, who scored that previous blockbuster.  For the film, Conti provided a brass-heavy orchestral score with a very rousing, militaristic main theme, which is introduced fully developed in the “Main Title” cue.  Another full presentation has a strong impact in the cue “Convention and Election”, where it follows an exciting trumpet fanfare.

The score is dominated by action cues heavy on brass and percussion.  Blaring trumpets dominate action cues such as “Torching the Tent” and “The Big Strike” while a solo French horn is used very effectively in “My Friend Abe”.  Strings are most noticeable in the cue “Johnny Goes to Washington”, where they join in with the brass to create a majestic sound.  Strings also are surprisingly dominant in the end title suite.

A soundtrack LP issued at the time of the film’s release featured a relatively short 30 minute album presentation of the score.  In 2005, Varese Sarabande released a limited edition CD (now sold out) of the same LP program coupled with another 1978 Conti score, “Slow Dancing In the Big City”.