By Andy’s 5th birthday, he had completed his first full year of pre-school, as well as a couple years in a weekly Gymboree program.  Between the two, he had made a lot of friends and had also had the opportunity to attend quite a few of his friends’ birthday parties.  This led us to think that it was a good idea to celebrate his 5th birthday (something of a milestone) with his first real birthday party with other kids.

We live in a townhouse that doesn’t have a yard or an overall design that would really be suited to having a large group of kids over.  While there is a party room available for rent in our condominium complex, it isn’t really overly kid-friendly either.  We realized that we really needed to find a kid-appropriate venue for the party.

Our first thought (and Andy’s first suggestion) was Farrell’s, having spent his birthday there the two previous years.  We looked into it and found that the price wasn’t too out of line, but we had major reservations about whether or not it would really work all that well for a big group of pre-school aged kids.  Other than the little merry-go-round, Mountasia really doesn’t offer much for kids that age and we were picturing a party that was little more than the kids all sitting around a big table eating ice cream and pizza. 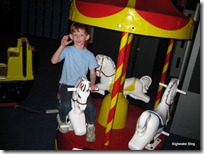 Andy was still kind of pushing for having the party there, but we were able to placate him by promising a family visit there not too long after his birthday.  We ended up going up there the weekend after his birthday for dinner and ice cream, inviting a few of our adult friends to meet up with us there as well.  Of course, Andy again got in a bunch of rides on the little merry-go-round.

Having recently been to another kid’s birthday party that was held at a local play gym, we realized that it would be vastly preferable to go somewhere that the kids could run around and play.  As I mentioned, we had been taking Andy to classes at a local Gymboree Play & Music location since he was really young. 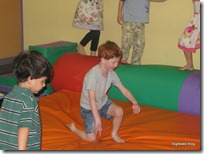 We checked into it and found that their prices for birthday parties were within our budget and that they had availability on Andy’s actual birthday (which was on a Sunday that year).  During his weekly class, we mentioned that we were considering having his birthday party there to his teacher, who is an outstanding teacher that Andy, and we, adored.  The teacher responded by offering to host and run the party if we booked it, which pretty much instantly sealed the deal for us. 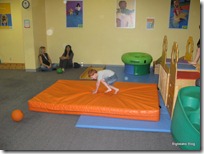 The majority of the kids from his pre-school class as well as a few of the Gymboree students attended the party, resulting in a turn-out of around 20 kids.  The Gymboree teacher and an assistant did an excellent job running the event, which had a great mix of organized play activities and free play.  The kids all seemed to have a great time and the parents seemed to enjoy watching them! 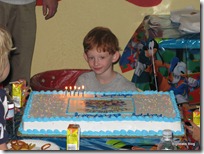 The package we bought did not include refreshments, so we ordered a sheet cake from a local supermarket and also bought various chips and juice for the event.  We were able to get a cake that was decorated with a picture of Mickey Mouse and his friends, which was a very good fit for our son’s interests.  We also were able to find Mickey Mouse paper plates, napkins, and cups to go with it.

After the party, we went home and let him open his gifts.  He ended up with a pretty large selection of items thanks to the reasonably large turnout at the birthday party.  Fortunately, so far he doesn’t seem to be expecting that every year.  I think we did a good job of explaining to him that the 5th birthday was kind of a special one.

In addition to the big party, he had a couple smaller celebrations as well.  This was his second year at his pre-school, so he once again had the little felt cake celebration there, similar to what they did the previous year. 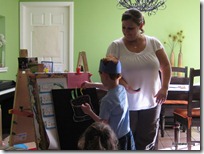 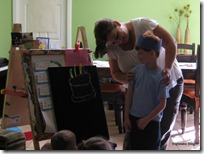 His pre-school was a primarily outdoor facility and it happened to be raining on the day that they celebrated his birthday.  On that day, school was actually held at someone’s house instead of at the usual school.

A couple weeks before his birthday, my wife’s parents came out to visit and we did a small party with them as well.  We picked up a small cake and let him open the presents that they had brought him.  We couldn’t help but feel that maybe he was a tad spoiled with all these separate celebrations that year, but we also wanted to accommodate everyone that wanted to celebrate with him.

Coming soon, I’ll conclude this series with reports from this year’s birthday!